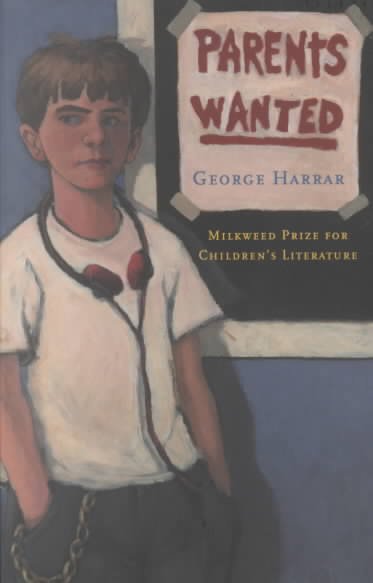 “Harrar has written a powerful book about second chances, trust and redemption, and about the difficulty of building a family.”

“Harrar perfectly catches the impulsive behavior of children with [ADD] and also lends some insight into the adoption process. Readers will care about Andy and appreciate the hopeful, realistic ending.”

“Readers will be touched…This is an excellent choice for those students whose lives have not always been comfortable.”

“Parents Wanted not only won the 2001 Milkweed Prize, but it will also win the hearts of young readers.”

“Harrar’s fictional yet amazingly realistic journey of one boy’s struggle through the adoption system is sure to satisfy.”

“Harrar creates a balance of tenderness, humor and dramatic tension in this convincing portrayal of an ADD foster child adjusting to a new family.”

“It is a joy to read a positive mainstream fiction book about building families through adoption.”

Parents Wanted introduces readers to Andy Fleck, a 12-year-old boy struggling to adjust to his latest family — his adoptive parents Jeff and Laurie — and to the idea that all rules were not meant to be broken. Allowing himself to trust his new parents and understanding the value of being trusted are the greatest challenges he faces. Andy’s strong narrative voice gives insight into the complex mind of a struggling kid, balancing his problems with his strengths as an energetic and lovable son.

I always thought I’d have my parents forever. I figured that no matter how much trouble I got into or they got into, we’d still be a family. But when I was ten years old they “surrendered their rights” to me, which is the legal way of saying they didn’t want me anymore.

The last trouble happened when I took a knife to school. I know that’s stupid, but it was a birthday present from Dad, and I was showing it off to my buddies. I got caught and suspended and sent home, but I didn’t stay there. I hopped a bus downtown. I spent all of my money on video games as usual, and nobody would give me a dollar to take the bus back home. I must have asked fifty people. Then I saw this guy buying ice cream, and a dollar bill was sticking from his pocket. I figured it was going to fall out any second, so I decided to help it along.

He caught me by the arm and wouldn’t let go. Then he handed me over to the police and the police handed me over to some social workers and they tried to hand me back to my mom but she said No Thanks. She told them she’d “had it up to here with me” and put her hand up to her eyeballs to show what she meant. She said that she had tried and tried and tried with me, but I was just too hard to handle. My mom should be in the movies–that’s how good an actress she is.

Anyway, the social workers believed her that I was a big pain in the butt and started looking for my father. They found him in Suffolk County Jail, where he was living for three to six months. It’s kind of embarrassing to say, but Dad’s a thief. My homeroom teacher, Mr. Smiley, yelled at me when I wrote that on one of those family cards they make you fill out at school each year. Father’s Occupation: Thief. What, did he want me to lie?

Personally, I don’t think I’m so hard to handle. I’m only ninety-two pounds, which isn’t very much for a twelve year old. I take after my dad in that. He’s skinny as a baseball bat. He says it’s in our genes to be thin. We could eat pancakes for breakfast and pizza for lunch and double Whoppers for dinner, and we still wouldn’t get fat. Mom used to say she put on weight just watching us eat. So it’s not like I’m big enough to be a bully or anything. And when Dad was around, you know I didn’t mess up because he has what Mom calls a “hair trigger,” like a gun that doesn’t take much squeezing to go off.

How much trouble did I get into? From what Mom told the social workers, you might think I tried to burn the school down. All I did was pull the fire alarm outside the basketball court one time. I had a good reason, too. Coach was going to make us climb the rope that day in gym, and I hate climbing the rope. Every kid hates climbing the rope, it’s just I was the only one who did something about it.

About the other stuff–the fights, the knife incident, skipping school–I’ll probably tell you all about them later, if you’re interested. You’ll see that Mom exaggerated a lot. The truth is, I was a lot better being the kid in the family than she and Dad were being parents. They drank so much that the apartment smelled like spilled beer. They fought so much that I had to stuff my ears with cotton balls and pull my pillow over my ears not to hear them. Mom didn’t like to cook, either, so there was never any food in the house except beer and pretzels for her and milk and cereal for me. Sometimes I had Fruit Loops for breakfast, Cap’n Crunch for lunch and Frosted Flakes for dinner. I’m kind of sick of cereal.

Like I said, Mom and Dad didn’t take very good care of me. I should really have surrended them, but that’s not how it works. Parents can walk into this place called “DSS”–that’s the Department of Social Services–and sign some papers and get rid of a kid they don’t want. But if the kid doesn’t like all the drinking and shouting at home, he’s stuck with the parents. That isn’t fair.

My parents signed some papers, and now I officially belong to the State of Massachusetts, where I live. My social worker keeps moving me to different foster families, hoping I’ll get along in one of them. I’ve been passed around like a puppy that nobody wants `cause it keeps messing on the floor. At least nobody ever rapped me on the nose with a newspaper. Some kids I know got hit by their real parents and their foster parents, but nobody ever struck me except for my dad.

I finally ended up in this group residence called The Brighton Boys Home. Don’t let the name fool you. It’s not anything like a real home where you have your own room and you can use the phone whenever you want and you eat your food with regular knives and forks. At The Home, there are two or three of us stuffed in every ugly cement room. There’s one hall phone that’s always busy, and I don’t have anybody to call anyway. Everything’s plastic, so you can’t hurt yourself with it. They have all of these stupid rules “for the safety of the children”–that’s what the counselors always say. Like, No Sharps or Flames at Any Time. That means no knives or scissors or matches or lighters. What do they think, I’m going to jab myself to death with scissors or set my hair on fire? I’m not crazy–my parents are!

I’ve been here five months. I’m supposed to be learning how to behave for when I go to a family for adoption. They say I’m doing pretty well, which just means I keep my mouth shut and say Please and Thank You all the time.

And I smile. I hate doing that because then everybody says I have cute dimples. I hate cute dimples. But if smiling is the only way I’m going to get out of here, that’s what I’ll do. I know this sounds weird, but I learned to smile from my cat. It happened the summer Dad swore off drinking and stealing and was trying to be a regular father. One day he decided I should have a pet and took me to the animal shelter to get a cat. In one of the cages was this big furry, mangy orange thing, and when I stuck my finger through the bars, he licked me. When I took him out and held him up, he started purring and licked my face. So of course that’s the cat I picked.

I named him Orange. As soon as we got home Orange started hissing at us and scratching if we tried to rub him when he didn’t want to be rubbed. At night while we were sleeping he sharpened his claws on the couch. He didn’t chase string when I dragged it down the hall, and he fell asleep when I bought him a ball of catnip and put it under his chin. He always wanted to be let outside, and he’d paw at the door till somebody opened it for him.

One night he didn’t come home. My friend Kenny said he saw a cat that looked exactly like Orange crossing the railroad tracks heading south. We never saw him again.

He was a pretty bad-acting cat, if you want to know the truth. So what I think is this: Orange was just faking being nice at the shelter so somebody would take him out of there. Otherwise they would have put him to sleep.

I learned a lot from that cat about smiling and acting nice even when you’re really angry. I must be good at it, because now they say I’m ready to look for someone to adopt me.